Since earlier this evening, I was able to play STALKER for an hour without it crashing when I tried to save !!!!!?!!!!!

I have no idea why this works, and I shudder to think what’s likely happening under the covers when this works – it’s the oddest workaround ever:

I marked the Stalker executable as Large Address Aware.

After doing that, I played for about an hour – the longest period ever – without it crashing.

I should add I’m using a 64-bit copy of Vista, and on 32-bit, you also need to bcdedit the UserVA to 2290, they reckon (the GSC forum doesn’t seem to be well-indexed, so I can’t find the link easily enough to post. But if you go trawl “single player bugs” in the official Stalker forums, you’ll find the threads. Eventually.)

Others in the same forums recommend the -noprefetch command line switch; I haven’t tried this yet, but hell, why not?

It looks like LAA might be the next big thing in 64-bit Vista compatibility. It’s already claimed as a panacea for Supreme Commander and others; might give it a try with Armed Assault, to see what shakes out.

Wonder why that works…

Let’s say that you’ve already exported your feeds to an OPML file for later re-import.

To export the Windows RSS feed list to OPML:

Let’s say that now, you want to get rid of them. All.

How would you go about doing that?

A while back, my slightly-retarded girlfriend bought an Iriver E10. I thought that was a pretty stupid choice. Many of you people – and let’s collectively refer to you as “imbeciles” – disagreed! The nerve!

The question was asked: so if I’m so smart, what would I buy? I mumbled something about a clix and didn’t really worry about it – I was happy with my gf’s unloved Samsung necklace.

Three weeks ago, in preparation for a long international flight on we-don’t-do-in-seat-entertainment-sir United Airlines, I needed some form of entertainment for the trip.

What did I buy? It wasn’t an Ipod… and if you’re not severely learning-challenged, you’ll know what I bought from the title.

Let’s run through my list of requirements again, this time using the Clix as ma’ ho:

It integrates so well, it works like a frickin’ bought one. It’s brilliant. It Just Works.

Honestly, I dunno, I lost them all. Bluntly, if anyone’s going to do DRM, it should be someone likely to still be in existence 99 years from now. Preferably, forever. I lost a bunch of music rights on NineMSN music recently somehow, so fuck them, and I’m scared of using Bigpond Music again for similar reasons (they found no record of one of my album purchases, so credited me an album).

Er, ranting aside, I assume it does the Windows DRM thang, based on the WMP integration and the PlaysForSure* (* – note: may not play for sure) certification thingo.

Has a standard mini USB 2.0 socket for charging and transfer: NO! BUT THE CRADLE DOES!

Noooo! Iriver, you bastards! So close to being perfect, and no mini USB socket. 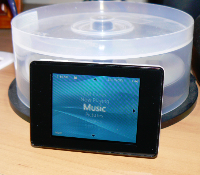 If you pick up the Cradle, though, the cradle does have a USB socket, plus the cutest little tinny speakers you’ve ever seen. So I charge it in the cradle now, via USB, from the Media Centre (which offers to play the video stored on the clix – how very cool).

Just Windows Media Player! None of this Plus 3 bollocks!

Well, perhaps a qualified yes – DivX videos didn’t Just Work, I needed to reconvert them to 15fps 384k DivXs before they worked. The tool for the job: a SUPER tool, called SUPER© . Yeah, the name’s totally gay. But it works, says two seasons of The West Wing.

If there’s one complaint I have about it, it’s that it gets fingerprints on it really easily, but that’s a pretty lame thing. The inferface is good, very Media Centre, and everything pretty much Just Works.

It’s not without its issues, but it’s pretty bloody good. Sound quality is really good, video is okay – the screen is very crisp and bright, the video frame rate is all that leaves a little to be desired. Issues like: the cradle is at just the wrong angle to be put on a tray table on an aircraft (it’d need to be oriented further upwards).

And it’s small – not tiny, but it’s really very small, so I find I have to hold it fairly near my face to recapture that IMAX experience when watching video.

Also, it takes a while to charge, like 2.5 hours-ish, sometimes longer from USB. I got the 2GB model for about $AU200.

All up, very happy with my purchase.

We get a lot of attempted comment spam, as I am sure all bloggers do. I just had a look at an item in the moderation queue and had a bit of a laugh. The idiot spammer actually included rel="nofollow" in the links that he was trying to insert onto Pinkjoint. This is a tag that tells search engines to ignore the link, which is exactly contrary to the spammer’s purpose. Morans.

Armed Assault is my favourite thing at the moment – even though only the demo is available for us Englishers!

The demo as originally released had some issues, but BIS have been working hard to rectify and improve the experience, releasing near-daily updates.

These updates have been for both the demo client and the dedicated server (for the demo, it’s all in the one EXE), and they keep on coming…

“Daily” demo thread at the seriously-in-need-of-an-upgrade Bohemia Forums. Thanks to Marek and the team for the continuous support, I can’t wait to buy the game (pfft, game, it’s a simulation!) on Feb 22!

The drivers currently on Windows Update are also later than the Windows Vista RC2 set that Nvidia have been offering since October, and they fix a bunch of problems in Windows Vista – Media centre glitching when UI is overlaid on video, flickering when switching into full-screen mode from windowed, and general graphical hell in Armed Assault.

If you’re using the RC2s (96.85), you will need to uninstall them, go back to the RTM drivers, then use Update Driver in device manager to detect the new copy on Windows Update.

I posted this to the Armed Assault troubleshooting wiki, but it’s generally useful info, so here it is again:

The Nvidia RC2 drivers will not be replaced by doing a “Update Driver” check at this time, perhaps because they are dated later than the Windows Update drivers, despite being earlier versions.

To get back to the WindowsUpdate set, if you’ve installed the Nvidia RC2 release on RTM:

Towards January 30 2007, it seems likely Nvidia will offer an updated set of drivers for most of its cards, for the launch of Windows Vista.

Confusing versioning, but again, it really does fix a bunch of issues.