Because they never crash, because they don’t have bugs like Micro$oft Windoze. 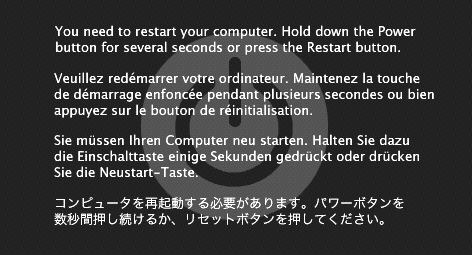 On a fresh install of Tiger, with all updates, I get this crash every 30 mins or so. I have no non-Apple software installed.

I was at a friend’s house last weekend, and he has become quite the fanboi. He demonstrated his Mac to me, to prove that I should get one. It locked up and had to be rebooted 3 times during the half hour I was in front of it. Applications had to be Force Quit. This did not weaken his faith, if anything it strengthened it. He blamed the crashes on one of either 2 possible causes:

He also questioned why I would have a USB hard disk instead of the vastly superior Firewire.