A while back, my slightly-retarded girlfriend bought an Iriver E10. I thought that was a pretty stupid choice. Many of you people – and let’s collectively refer to you as “imbeciles” – disagreed! The nerve!

The question was asked: so if I’m so smart, what would I buy? I mumbled something about a clix and didn’t really worry about it – I was happy with my gf’s unloved Samsung necklace.

Three weeks ago, in preparation for a long international flight on we-don’t-do-in-seat-entertainment-sir United Airlines, I needed some form of entertainment for the trip.

What did I buy? It wasn’t an Ipod… and if you’re not severely learning-challenged, you’ll know what I bought from the title.

Let’s run through my list of requirements again, this time using the Clix as ma’ ho: 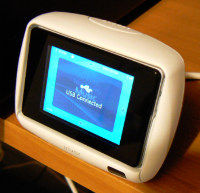 It integrates so well, it works like a frickin’ bought one. It’s brilliant. It Just Works.

Honestly, I dunno, I lost them all. Bluntly, if anyone’s going to do DRM, it should be someone likely to still be in existence 99 years from now. Preferably, forever. I lost a bunch of music rights on NineMSN music recently somehow, so fuck them, and I’m scared of using Bigpond Music again for similar reasons (they found no record of one of my album purchases, so credited me an album).

Er, ranting aside, I assume it does the Windows DRM thang, based on the WMP integration and the PlaysForSure* (* – note: may not play for sure) certification thingo.

Has a standard mini USB 2.0 socket for charging and transfer: NO! BUT THE CRADLE DOES!

Noooo! Iriver, you bastards! So close to being perfect, and no mini USB socket.

If you pick up the Cradle, though, the cradle does have a USB socket, plus the cutest little tinny speakers you’ve ever seen. So I charge it in the cradle now, via USB, from the Media Centre (which offers to play the video stored on the clix – how very cool).

Just Windows Media Player! None of this Plus 3 bollocks!

Well, perhaps a qualified yes – DivX videos didn’t Just Work, I needed to reconvert them to 15fps 384k DivXs before they worked. The tool for the job: a SUPER tool, called SUPER© . Yeah, the name’s totally gay. But it works, says two seasons of The West Wing.

If there’s one complaint I have about it, it’s that it gets fingerprints on it really easily, but that’s a pretty lame thing. The inferface is good, very Media Centre, and everything pretty much Just Works.

It’s not without its issues, but it’s pretty bloody good. Sound quality is really good, video is okay – the screen is very crisp and bright, the video frame rate is all that leaves a little to be desired. Issues like: the cradle is at just the wrong angle to be put on a tray table on an aircraft (it’d need to be oriented further upwards).

And it’s small – not tiny, but it’s really very small, so I find I have to hold it fairly near my face to recapture that IMAX experience when watching video.

Also, it takes a while to charge, like 2.5 hours-ish, sometimes longer from USB. I got the 2GB model for about $AU200.

All up, very happy with my purchase.