Let’s say that you’ve already exported your feeds to an OPML file for later re-import.

To export the Windows RSS feed list to OPML:

Let’s say that now, you want to get rid of them. All.

How would you go about doing that?

…was going to be the title of this post, but it’s not any more! Tricky, hey?

See, it wasn’t X3’s fault, as it turns out, despite every other game seemingly running fine. At least, there were other contributing factors, so it wasn’t just X3.

X3 had been coyly winking at me from Steam for a little while, and after verifying that it wasn’t actually copy-protected in its online format, I decided to go for it. So, $US19.95 later, I’m downloading it. An hour after that, I’m nearly ready to put a boot through my monitor: it crashes almost every time the target changes. And that happens a lot.

I tried all the usual stuff: driver upgrades for the nvidia 6600GT and nforce4 motherboard; random other tweaks, settings (EAX, graphics, glow, blah, blah blah) but nothing seemed to work.

Ultra-long hair-pulling story short, with a new processor driver, not one crash since. I’ve pulled the links together below… Somewhere between Dual Core and Cool n Quiet, the game was choking.

And for the record, I hate not being able to use time skip while docked any more. And yes, it’s still a good game with an insane learning curve and some counterintuitive UI decisions. But it’s lots of fun!

So anyway, I run a dual-core Athlon64 X2 4400+, and I use the AMD Processor Driver. It’s been updated since the last time I grabbed a copy (early June, I think)…

AMD Dual-Core Optimizer – The AMD Dual-Core Optimizer can help improve some PC gaming video performance by compensating for those applications that bypass the Windows API for timing by directly using the RDTSC (Read Time Stamp Counter) instruction. Applications that rely on RDTSC do not benefit from the logic in the operating system to properly account for the affect of power management mechanisms on the rate at which a processor core’s Time Stamp Counter (TSC) is incremented.

…to get around some Timing Problems (support.microsoft.com Knowledge Base article)

There’s a developer’s-eye discussion of RDTSC and how traditional game timing gets buggered by dual-core here: Game Timing and Multicore Processors (short article)

AMD have a short blurb on the RDTSC problem and related solutions in a PDF here.

Gamers: Just get the latest processor driver (and/or Dual Core Optimizer) and you’ll be right, mate.

Thanks to the joy of ClickOnce, the new beta of PjPic is self-installing and self-updating. So I won’t bother posting about it again. Unless something really interesting happens. Like it starts stripping for money. That would be postworthy.

Grab from the PjPic page.

On steroids, that is, without the shrivelled um… equipment and rage issues! 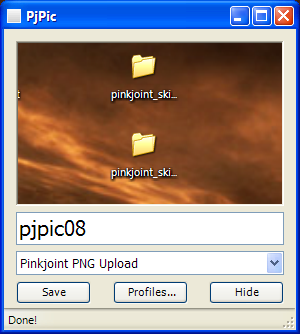 It’s got multiple save profiles (one folder per profile, one upload location per profile, one set of clipboard text per profile) – which was the biggest drawback of Pasteoff when posting to twenty blogs, uses the .Net Webclient class to support uploads to HTTP, HTTPS and FTP sites, and has a custom FTP implementation that supports active FTP.

Upload Passwords are stored using DPAPI via .Net, so they’re more secure in the profile than on the wire!

You copy an image to the clipboard, then double-click the tray icon to save that image in the format of your choice.

And you want to upload a file to a server using HTTP, HTTPS or FTP…

And you find the System.Net.Webclient class, and think “Wow! That looks perfect!”

And you find that the System.Net.Webclient doesn’t expose that property, so anytime you encounter an Active only FTP server, you’re toast…

And while re-implementing all the FTP stuff already in Webclient with System.Net.FtpWebRequest/FtpWebResponse, you wonder why they couldn’t have just exposed that one little property.